You are here: Home » Patient Info

For millions of Americans, this time of year is open enrollment, where you are tasked with deciding between multiple confusing insurance policies with various percentages, deductibles, copayments, and other poorly explained numbers.

If you happen to be looking at dental insurance and are planning to pay for it yourself (in other words, it’s not primarily paid for by an employer), I’ll save you a lot of time and tell you that it is probably not in your financial interest to purchase dental insurance. There are better options, like our in house plans.

Right off the bat, calling dental insurance “insurance” is a bit of a misnomer. Insurance is designed to cover a calculated risk (e.g. what are the odds your house will suffer flood damage). With typical insurance, actuaries calculate and determine the premium necessary to ensure profitability for the company by determining what these potential losses look like across their risk pool.

Dental insurance is inherently different in that these high dollar losses simply aren’t possible as dental benefits typically max out at $1500 to $2000 dollars a year, however, needing dental care is a practical certainty for most people.

As insurance companies are not in the business of losing money, the benefits provided have to be less than the amount charged, which is why if you are paying for it on your own (not employer sponsored), it’s typically ill advised. A better way of viewing dental insurance is “payment assistance” rather than something designed to eliminate financial risk for dental care.

What is HMO Dental Insurance?

HMO dental plans share no relation to HMO health plans, which unfortunately leads to a lot of confusion. HMO dental plans (DHMOs), on paper at least, look attractive. They typically cost very little per month, typically have no deductibles, and they cover a wide range of procedures at nearly 100%.

The catch is that they severely limit who you are able to see by assigning you a specific dentist. If you do not like the dentist you were assigned, you need to request that the company reassign you to a new one.

This can often be a very short list of dentists depending on your location. There’s also the dark side to DHMOs: despite the numbers on paper, in reality you will typically be spending more than if you elected a PPO plan or had no insurance at all.

Consider the following example treatment plan. We see some fillings and then codes for those same teeth for gingival access and medicament. This is what we call ‘unbundling’.

Essentially, the filling itself should already include those additional codes at no charge, but these codes are being added on anyway. The patient is then being asked to pay out of pocket despite an HMO insurance plan covering fillings at “100%” if these were amalgam fillings.

It can often be even worse, where a ‘non-covered’ procedure code is used instead. In place of a filling, these could all be changed into inlays (this is very common), which will have no coverage at all, and will be significantly more expensive than a filling. Disclaimer: just because you have an inlay treatment planned for you doesn’t necessarily mean you don’t need one.

Why Does This Happen?

Office space, payroll, and dental supplies are all expensive. The economic reality is that an office cannot stay open if they are paid less by insurance for doing a filling than they are paying the assistant or front office staff for that amount of time. Because reimbursement from DHMO insurance is so low, additional and unnecessary codes are tacked on, procedures are rushed, and the quality of the materials used goes down simply to stay in business.

According to the ADA, the average dental office does a little over $650,000 a year in revenue and has overhead of 76%, without factoring in the Dentist’s salary. This gets us to an overhead value of about $500,000.

Yes, business majors out there are wringing their hands about variable costs, but I’m trying to simplify things here to illustrate a point.

The real number is quite a bit higher because few offices are open that much, but it illustrates the point as to why a dentist can’t spend $180 in time and materials on a filling when the insurance company is paying $20 for it.

Then you shouldn’t accept them!

You say, “But a dentist shouldn’t accept these plans if they aren’t willing and able to perform high quality work in an ethical manner!”

To which I say, I absolutely agree! HMO plans are widely looked down upon in the industry for this reason. Unequivocally, a dentist has to cut corners to make them work long term. I’ve seen some newer offices use them in the early years to fill empty spots in the schedule, but it’s not sustainable and each patient seen ethically costs the office money. In fact, many banks will not allow dentists to accept HMO
dental plans as a condition of receiving a loan.

If you’ve ever seen the movie “The Dark Knight”, the phrase “You either die a hero, or you live long enough to see yourself become the villain” comes to mind here. With HMOs, something will give.

What is PPO Dental Insurance?

PPO dental plans allow you to see whichever dentist you want to without approvals needed from the insurance company. In return, there is typically a small deductible ($25 – $100) paid for any work beyond your typical exams and cleanings (although this isn’t always the case. I’ve seen where there is a deductible applied to x-rays), as well as a larger copay (your portion of the treatment) on most procedures compared to an HMO plan.

However, as discussed above, the numbers stated by the insurance company don’t paint the full story.

In Network vs Out of Network

You have the choice of two different types of providers when you have a PPO plan, dentists that have elected to be in network with your dental plan and are accepting negotiated rates, and ones that have not (out of network). Once you have utilized your annual maximum benefit, you effectively have no insurance. In such cases, many out of network dentist give a discount to patients without insurance that far exceeds their insurance discounted rate.

When you look at what your dental plan covers, like the one below, they’ll list out various groups of procedures, as well as the percentage they cover. These percentages are only true if the provider is in network (while it may seem pedantic, it’s not even fully true then, but I’ll get to that). 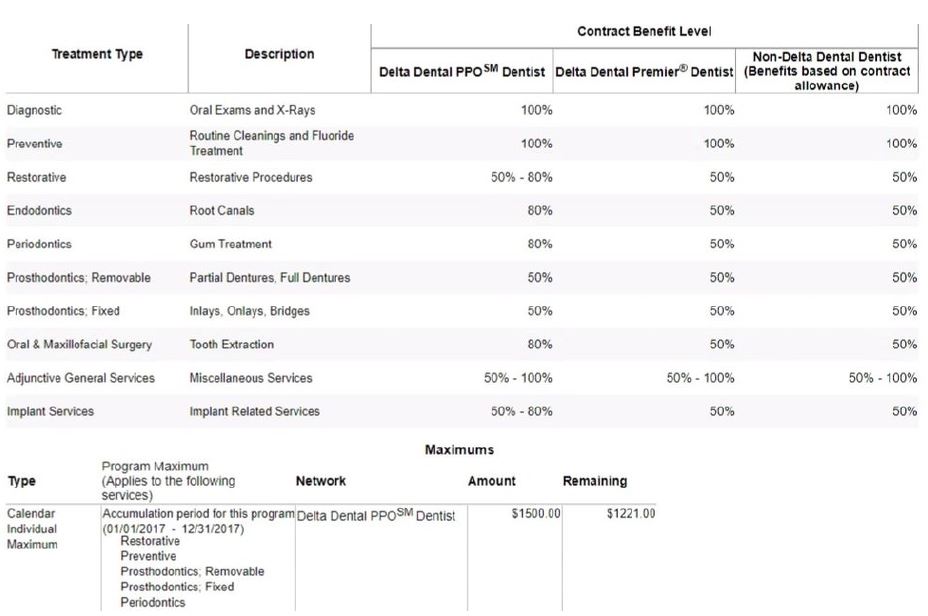 Negotiated rates are basically a discount afforded to those that are covered by a specific insurance company. PPO dentists feel a need to get paid less for a given procedure in exchange for trying to acquire new patients. Your insurance company will have a list of these kinds of dentists available on their website.

The fees paid to the dentist by the insurance company are slightly higher than those offered by HMO plans, but many of them are still so low that it typically result in similar treatment and billing issues as HMO dentists.

Out of Network Dentists

So by contrast, an out of network dentist doesn’t follow any sort of negotiated rate and has no contracts with the insurance company. So when your insurance company lists that they cover your cleanings, xrays, and exam at 100%, the question then becomes, 100% of what?

For example, one insurance company may feel that $120 for a cleaning is their number (that’s a fairly typical fee if you’re located in San Diego), and they’ll pay up to that. Another company may feel that same procedure should only be covered at $25, so you’re responsible for the difference between $25 and whatever your dentist is charging.

To further complicate things, there are not only variations between companies, but variations in covered values between plans within a company. I’ve seen the same insurance company cover 10% of a procedure and 100% just due to differences in plans between one employer and another. To top it off, an insurance company often won’t even reveal this number in advance. Personally, we spend countless hours trying to obtain this information.

Sometimes insurance will play what we know in the industry as the “hot and cold” game. Basically, the office manager at your dentist’s office will call the insurance company and ask them for the UCR on a given procedure. The insurance representative will naturally say that the UCR can’t be provided. So then the office manager will say, “if our fee is $300, is it more or less than that” with a response returned of “less” or “more”. This is repeated until the specific number is obtained.

Sound ridiculous? I think so too. Unfortunately, they won’t even do this, so we are left estimating based on previous experience with the company.

To circle back to what I said above relating to negotiated rates and that they don’t always cover their stated percentages, assume the following scenario:

You’re going to the dentist for a filling on a molar. Your insurance says they cover this procedure at 80%, and the total negotiated fee is, to keep things simple, $100. Let’s ignore your $50 deductible for now and just assume that has already been met.

Well, maybe. Most of the time, if this is a molar (a posterior tooth), your insurance company won’t pay the price for a modern ‘white’ or a composite filling, they’ll cover a silver or amalgam filling. So let’s say their set fee for that amalgam filling is $60—they’ll cover 80% of $60 now, or $48. This means that you are responsible for $52 for that white filling. If you had to pay your deductible, you’d be paying the entire $100 out of your own pocket.

While this is hugely prevalent with fillings, it’s also seen with crowns, onlays, or just about anything where an insurance company can get away with it.

Your insurance company has a list of procedures they will and will not cover and it’s entirely based on the specifics of your plan. Almost universally, things like veneers and whitening are not covered.

Orthodontic benefits are hit and miss—some offer it, some don’t. If you go in with the assumption that if it’s cosmetic in nature, it’s not covered, you’ll typically be pretty accurate.

What might catch you by surprise are if you have periodontal disease and need additional cleanings(typically only two are covered per year), if you have emergencies pop up where the limited exams might not be covered, or where some procedures are age restricted, like sealants or fluoride.

In terms of non-covered procedures, there is no benefit visiting an ‘in network’ dentist.

The Dental EPO, the New Kid on the Block

EPO stands for ‘exclusive provider organization’. These plans are essentially a dressed up hybrid between HMO and PPO insurance – an HMO with a bowtie if you will. The primary difference is that EPO plans only allow you to see an in-network dentist, but they don’t require you to call the company to request to be transferred.

In short, there are no out-of-network benefits offered at all.